“How can you be so incompetent? One sale! One sale! How can you only make one sale in a month? That is ridiculous. It was a measly sale at that!” bellowed an extremely angry and frustrated sales manager. “Jack, if I don’t see improvement soon, you are out of here.” “Not again,” thought a very depressed, dejected Jack Blake. This was his third sales job in a year and he was failing again. “What is wrong with me?”

If you have ever felt like Jack then rest assured there is nothing wrong with you. You may just lack proper sales training. “Sales Success” can be that answer for you.

Mark Bowser’s new book ‘Sales Success’ is in bookstores now. We are looking for people who are willing to give us feedback on Amazon by writing a book review.

For a temporary time, the publisher has lowered the price of the ebook to only 99 cents. You can get the book here: http://amzn.to/1QhCiph.

Book reviews are huge in the world of book marketing. It would be very helpful to have your feedback.

We are all honored that ‘Sales Success’ is one of the last big projects that Zig Ziglar was a part of before he passed away. 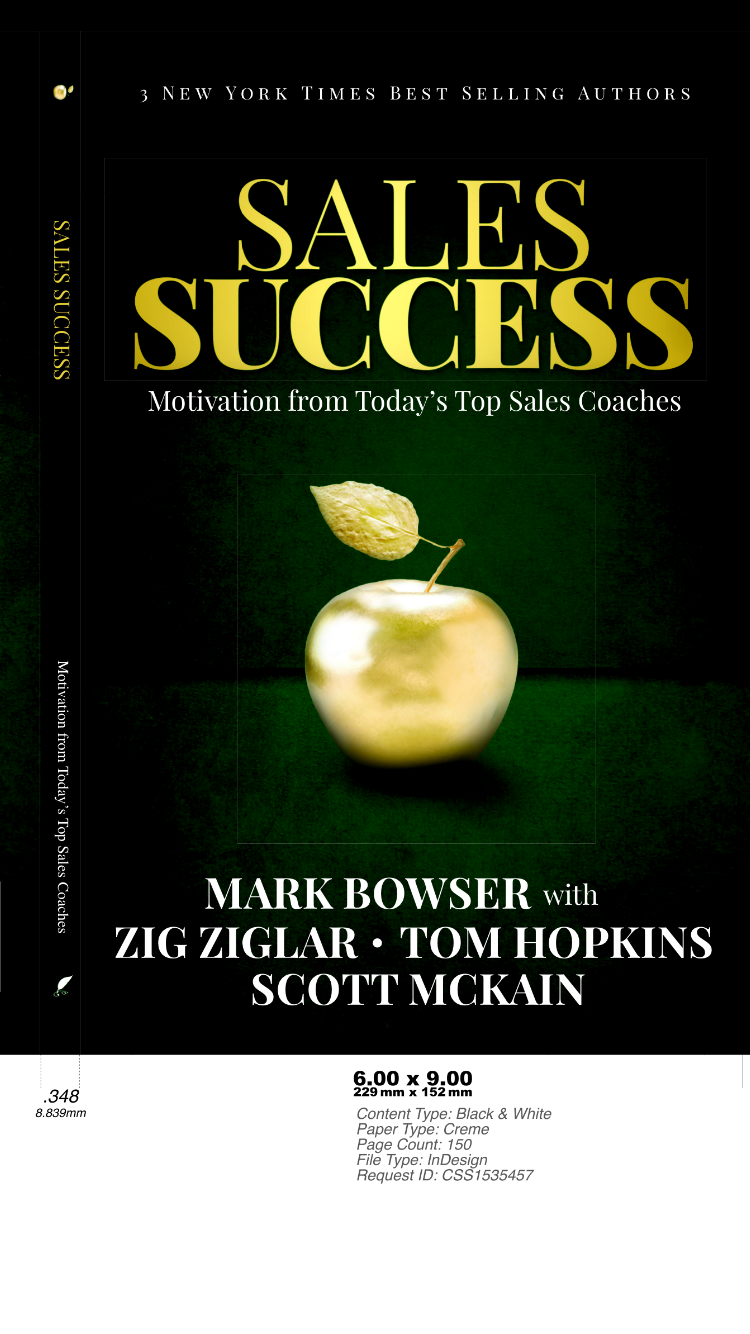 We are all salespeople. We sell our kids to not get on drugs. We sell our co-workers on where to go eat lunch. We sell our spouses on the movie to see this Friday night. We sell products and services if your job title is sales representative. We sell by the brand clothes we wear. And, we sell ourselves. It is all about influence. Learn how to master the art of influence with “Sales Success.” Written by Mark Bowser with Scott McKain, Tom Hopkins, and the late Zig Ziglar.
Get your copy today at a bookstore near you or simply go the book’s page at Amazon http://amzn.to/1QhCiph

The day will be here before we know it. Mark your calendars for the launch date of one of the most exciting books on selling in years.“Sales Success” lands at a bookstore near you on May 1, 2016. Available online too.

What is your competitor doing down the street?  If you can’t answer that question then that is a dangerous position to be in…that is if you want to grow your business.  Walt Disney said, “When I started on Disneyland, my wife used to say, ‘But why do you want to build an amusement park? They’re so dirty.’ I told her that was just the point— mine wouldn’t be.”

In Walt’s day, amusement parks were not only dirty in appearance, but often also in morals.  Amusement parks of that era were not the same as they are today. We can thank Walt Disney for the experiences we have today.  You see, Walt saw what the competition was doing and had the vision to improve upon it.  Yes, he saw the flaws and imperfections, but he also saw the possibilities. We must do the same thing in our business’ and careers.

Scott McKain is a friend of mine who is a distinction expert.  He has written incredible business books such as Create Distinction and the 7 Tenets of Taxi Terry.  Scott says that one of the problems in the marketplace today is that most business’ are very similar to their competition. The grocery store I shop at is probably very similar to the grocery store you shop at on a weekly basis.  Now, when Scott talks about being distinctive, he is not talking about being different in a silly way.  He is talking about what Walt did with Disneyland.  Walt Disney took a worn out idea, the amusement park, and transformed it into the happiest place on earth.

So, how can you stand out from your competition?  How can you learn from them and improve it?  That is the key.  That is what Walt called “plus-ing.” Taking an idea and making it better.

“Customers want to repeat experiences that positively impact them in an emotional manner.” Scott McKain__

Are you creating an emotional connection with your customers?

Join any one (or all) of our premier free newsletters today to succeed more tomorrow!

The Empower Newsletter: On Getting and Staying Positive

The All About Books Newsletter: Stay in the know about Mark’s books